Giffords Circus came to Stonor Park the other day. 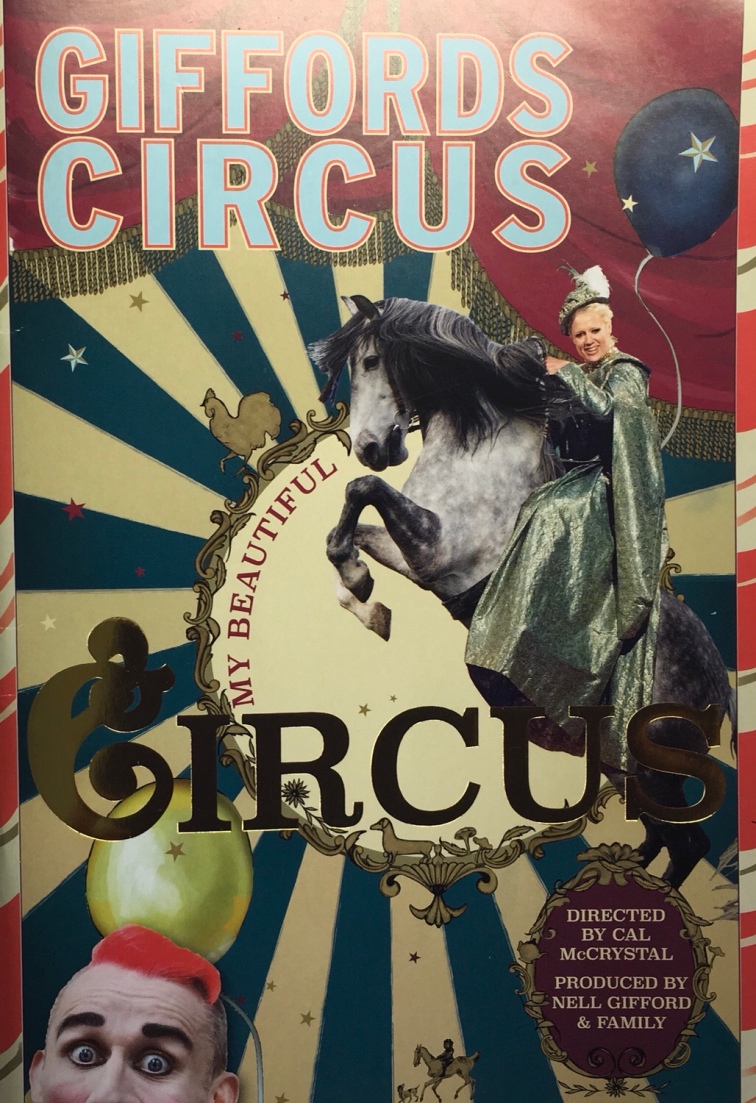 The year 2018 is the 250th anniversary of the birth of circus. To celebrate this particularly English invention, Giffords Circus, the nation’s most glamorous troupe, has been throwing a summer-long party. With its new seats – all lined in plush red velvet – (wish they’d covered the wooden backs with cushioned velvet too!) – we arrived at Stonor Park the other evening to seat ourselves in the new Italian hand- made tent. First on to the stage we’re the clowns, followed by the Giffords Circus Band. They were dressed immaculately in Edwardian clothes and set the scene straight away.

One of my favourite acts was Dany Cesar with his tiny horse troupe and his amazing dancing horse Diamond. 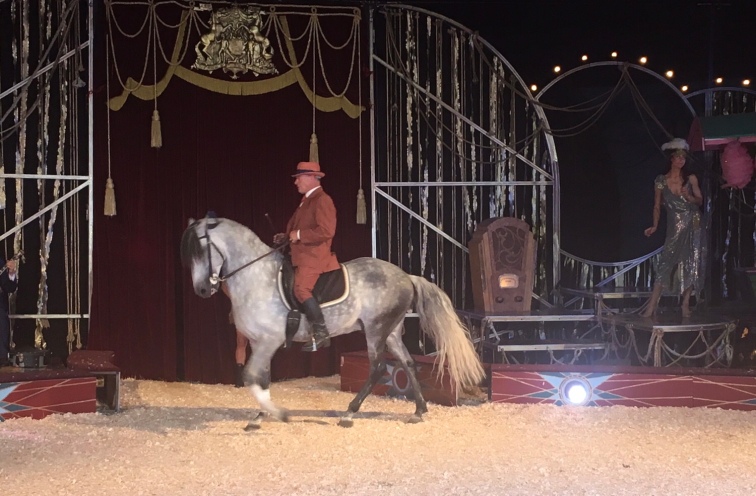 In a gorgeous array of 1930’s inspired sequinned dresses, tail coats and top hats, this circus’s talented musicians, Cuban acrobats, Italian gymnasts, Russian Dachshunds, Nancy Trotter Landry and her talking turkey – they were all celebrating the golden age of Circus. Here are a couple of the acts. 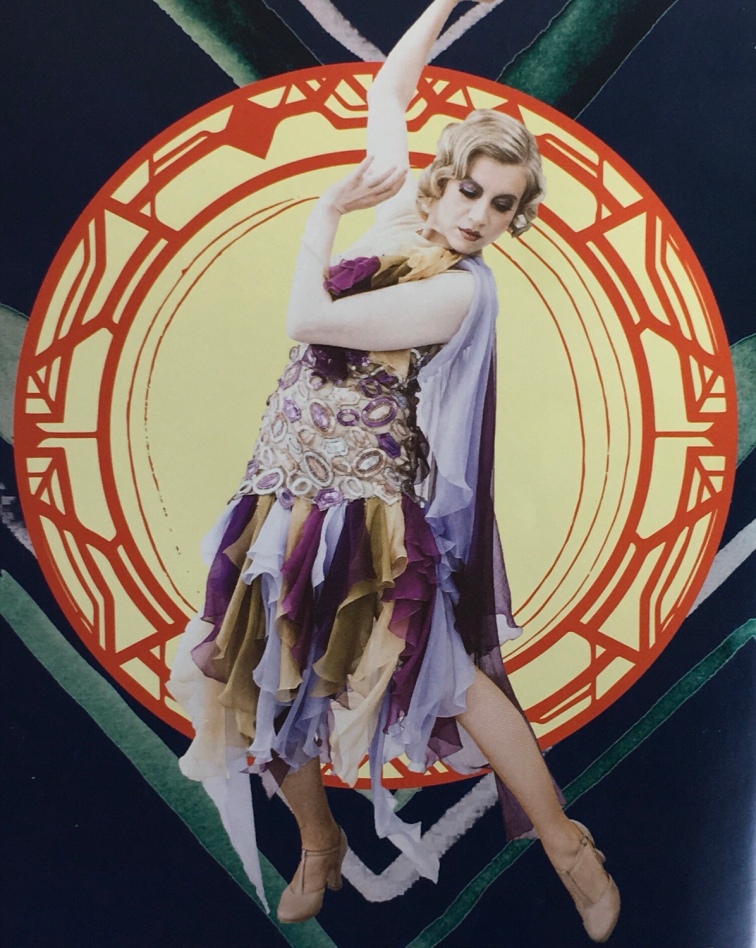 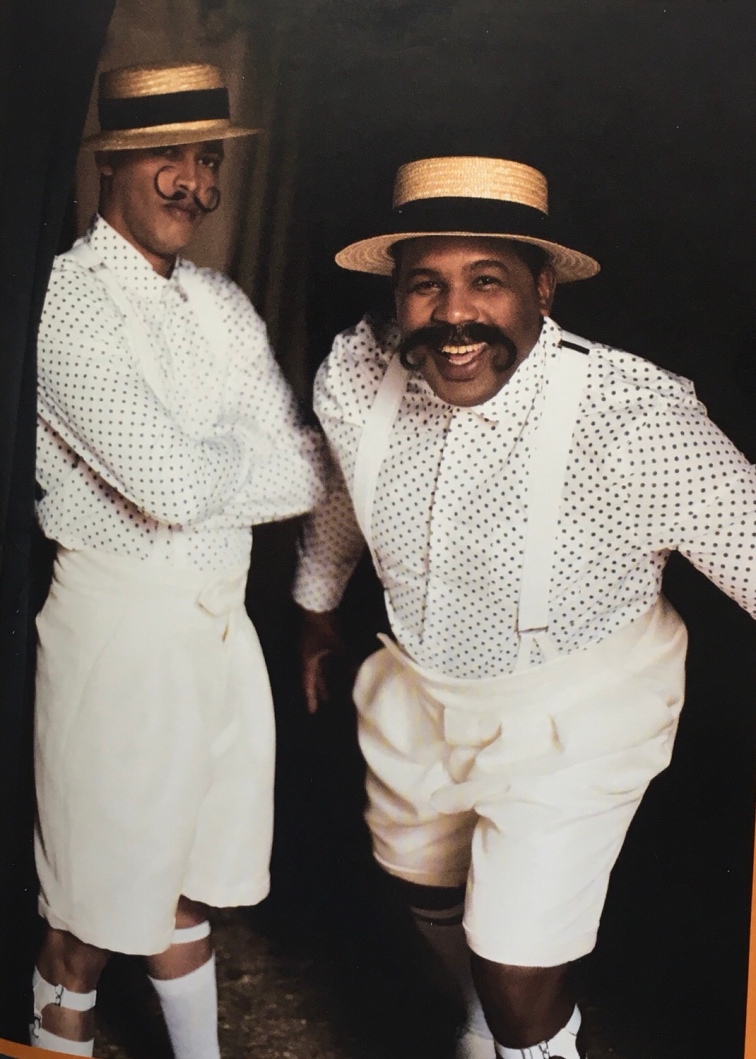 This hot weather has been wonderful for river trips – sometimes a little too hot during the day but so relaxing in the evenings. Now that the Royal Regatta and Henley Music Festival is over, we have our river back again. 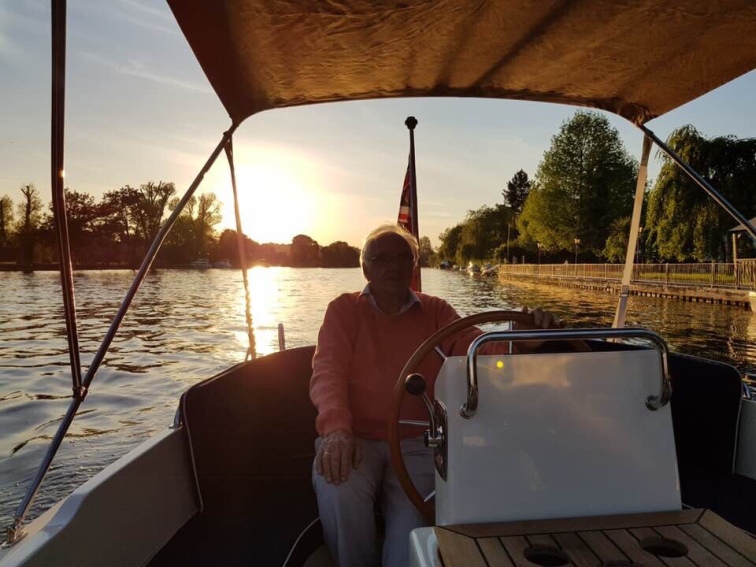 After over 80 years of defective sight, at last I’m on the way to, hopefully, really good eyesight. The first step was last Friday when Doctor Vaughan Tanner removed the cataracts in my right (good) eye and inserted a ‘Toric’ lens which has effectively cured my astigmatism. The improvement is really quite amazing. Next Friday I will be going again to The Princess Margaret Hospital in Windsor where I will have the same operation in my left eye. Hopefully then, after a few weeks, I will be able to have varifocal lenses made so I won’t need to carry around reading glasses – which I have to do now. But it is incredible that I can see long distances perfectly sharp without the need for glasses at all. The operation itself lasted less than half an hour, starting with five drops in my eye administered by the anaesthetist followed by a lot of bright lights dazzling my eye as the surgeon removed the cataracts, then, after making a 1.5 mm incision in the top of the eye, he inserted the new powered lens, which apparently opened automatically in my eye. And no pain whatsoever. I certainly can highly recommend this operation. When the other eye is operated on next week I fully look forward to a new lease of visual life.

The other evening my young friend and and I were invited to dinner by good friends of ours. The last of the very warm evenings, this was the magical view from our table on their verandah. (The little smattering of rain only lasted about ten minutes and reminded me of Singapore with its humidity. 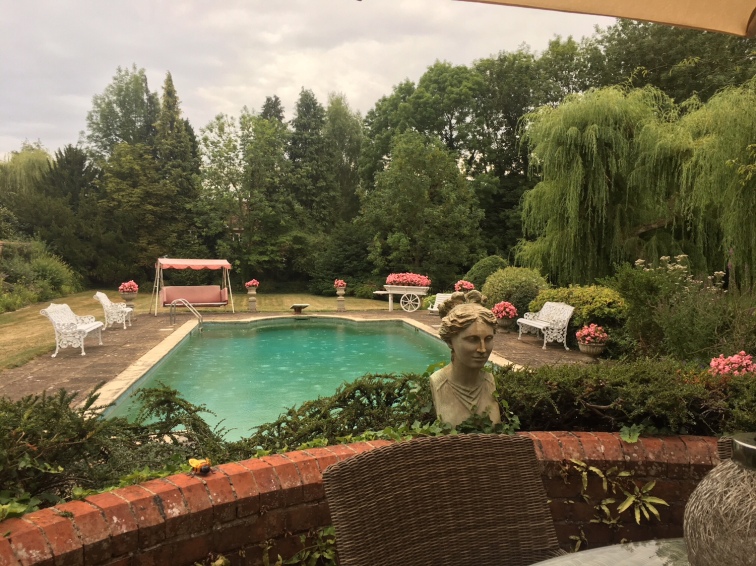 On a very hot day the other Sunday I spent a couple of hours at the Boat Show held on Fawley Meadows in Henley. One of the main attractions this year was Donald Campbell’s speedboat – Bluebird K3. 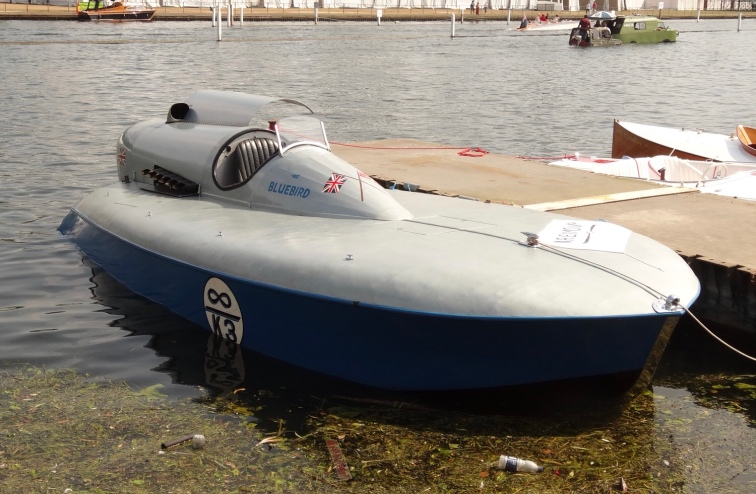 I didn’t stay long enough to see it perform but apparently it sped down the course at a good speed. Some of the attractions at the show were these two car/boats 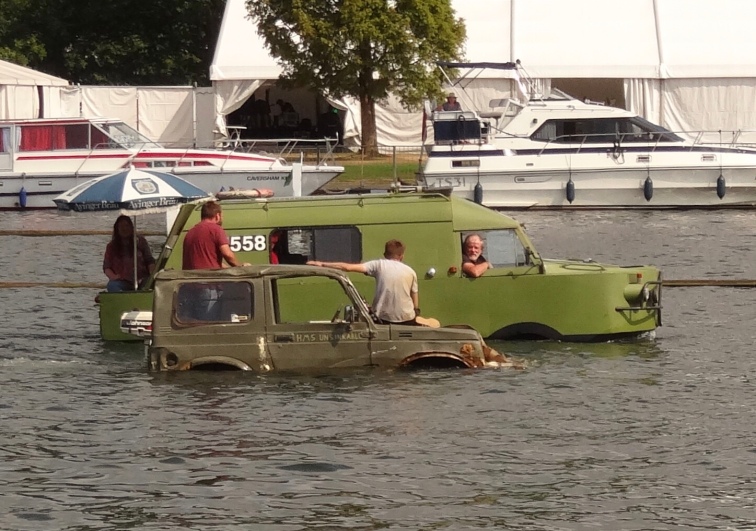 There was an array of Dunkirk Little Boats including L’Orange owned by John Calvert where I spent a pleasant half hour chatting and drinking elderflower wine. The Queen’s Barge Gloriana put in an appearance – As did a variety of weird craft – and even vintage bicycles 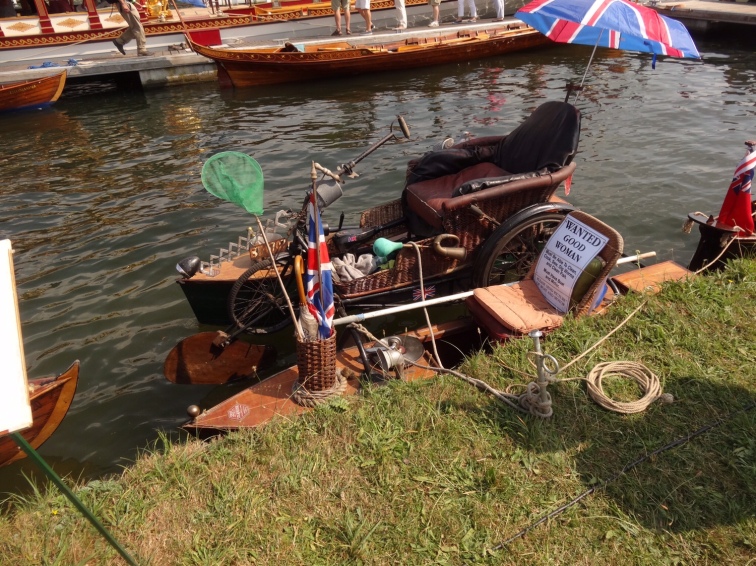 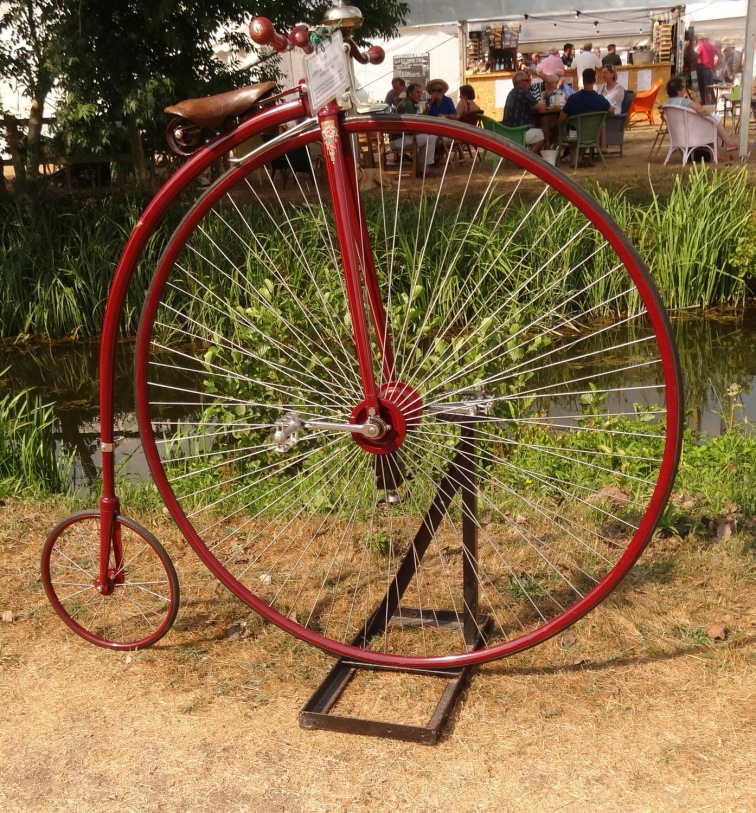 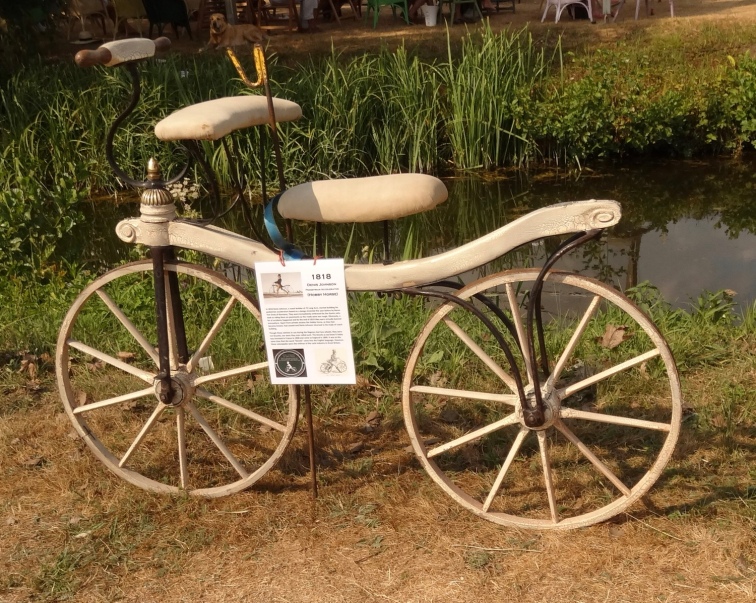 I’m still re-living my Spitfire experience. Certainly the most interesting thing I’ve ever done. So to add something else to my ‘bucket list’ – (I assume that expression means things to do before you ‘kick the bucket’) – in a couple of years I intend to start saving again so I can go on another Spitfire flight when I reach the age of 90. But this time I will fly over the white cliffs of Dover.